CB3 Communications Blog
The art and science of communications: From strategic to personal

Mission Command.  Most military personnel in modern armed forces, certainly in the West, understand it.  It constitutes a style of military command promoting decentralisation, freedom, speed of action, delegation and initiative. Subordinates, understanding the commander’s intentions, their own missions and the context of those missions, are told what effect they are to achieve and the reason why it needs to be achieved.  Indeed, most civilians will recognise it, practisng ‘management by objectives’ or the management concept of empowerment.

A bright lad, our Mr Clausewitz.

Originating in Clausewitz’s 19th century German armed forces, known as auftragstaktik, mission command works ideally in high tempo and complex warfare.  Although the ‘thousand-mile screwdriver’ is still commonplace in military operations, and in corporate affairs, high ranking political officials would never dream of attempting to dictate to the soldier on the ground how to achieve his objective – even though, as per Clausewitz, “war is an extension of politics by another means”.  It works because of highly specific objectives and a confidence in highly trained and experienced operatives, allowing for a serious degree of delegation.

Today’s warfare, ‘War 2.0’, is a far cry from  that of the age of industrial force-on-force struggle.  In counter-insurgency, operations other than war, ‘war amongst the people’ and the like, communication, both simple and hi-tech (from the tribal gathering to the Second-Life propaganda) has become a major feature of conduct of warfare, conflict, call it what you want.  As is increasingly becoming apparent in docrine, opinion, papers and at conferences, communication – stratcom, influence, public affairs, public diplomacy – is as considerable a factor, or operational capability, as tanks, bullets and bombs.  However, whilst the latter are often utilised under the code of Mission Command, the former is not.

The tight, codified, process-driven and hierarchical systems within with military communication stymies any real effectiveness in War 2.0 – a fast and dynamic environment in which the ‘enemy’ may, as well as having the flexibility and responsiveness afforded by decentralisation, freedom, speed of action, delegation and initiative (sounds familiar? – see the first paragraph), have as good, if not better, capabilities than the modern fighting forces.  Indeed, modern fighting forces, are hamstrung for may immovable factors  – politics, enemy capabilities, inherent communicative advantages afforded to insurgents etc – but there is one area, command style, which is in the gift of modern fighting forces to change.   The concept is well practised and widely applied, but can the style of mission command extend to communications? 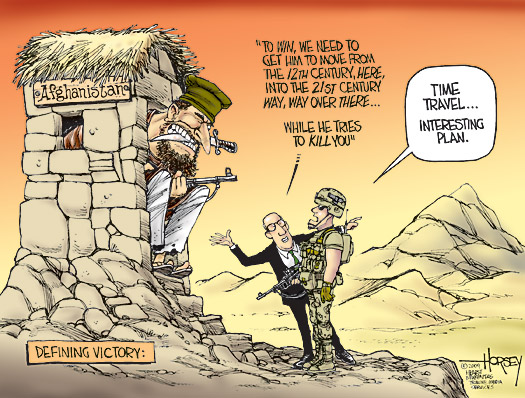 Of course, mission command requires a degree of specific guidance!

There is an argument that communication is too strategically potent or politically sensitive – what is said, what is perceived, what is seen on the battlefield may have strategic effect – it may even make a Minister/Senator or a government policy look bad.  But today, with the concept of the ‘strategic corporal’ ever present, in which the tactical military actions of very junior personnel have the capacity to bring about huge strategic impact, the same can be applied to any military action.  Thus, why should the command and management of military communication (public affairs, info ops etc) be any different to other traditional military function?

Political sensitivity, organisational culture, lack of a professionalism (in the strict sense of the word) – these all contribute to the inertia, the inability of the hierachy to’ let go’.  But the signs are there.  Without decentralisation, freedom of action, speed, delegation and iniative afforded to professional and highly trained operators, then the command style will continue to restrict progress in strategic communications, regardless of how good the ‘message’ is.  Applying mission command to strategic communications is not straightforward, but acknowledging that a lack of it, or certainly its ethos, is a first step.  There will be immovable obstacles (some there for good reason), but examining where elements of mission command style could be employed in communications may just break a logjam of our own making.

World without Walls – International Congress on Interdependence and Cultural Diplomacy

The Instutute for Cultural Diplomacy in Berlin is hosting an International Congress on Interdependence and Cultural Diplomacy from November 6-9th. “A World without Walls”, hosted in honor of the 20 year anniversary of the fall of the Berlin wall, will bring together an international group of young leaders, political and diplomatic representatives and individuals from the private sector and civil society for a four-day program of lectures and seminars in Germany’s capital.

During the program, participants will consider the development of international relations over the past two decades, explore the challenges and opportunities of interdependence, and look at the importance of cultural diplomacy in ensuring sustainable multilateral cooperation. The speakers at the event will be leading international figures from politics and academia, who will be able to add unique perspectives on these three issues under consideration.

A selection of already confirmed speakers can be found below:

Further information can be found under: www.world-without-walls.org or contact worldwithoutwalls@culturaldiplomacy.org

Reply
FOR THE NEW BLOGSITE CLICK BELOW www.cb3communications.com
"Public discourse is like a public swimming pool; most of the noise comes from the shallow end." Anon
Picture of the Month

For more discussion visit us here: